Allegro Community Chorus was presented with a new set of challenges when COVID-19 hit last spring. However, the switch to hybrid rehearsals provided a new and exciting opportunity for one dedicated chorus member, who after moving back to Japan, was now able to continue participating in rehearsals over Zoom from across the globe.

Kumi Nagaya and her family moved to the United States in 2015 for her husband’s work. Nagaya was led to Palatine Park District and Allegro Community Chorus by her children’s local elementary school. She had been singing for more than 25 years in Nagoya City, Japan and wanted to continue when she moved to the United States. She explained how when she came to the Community Center to register, she was not very fluent in English, but registration staff were extremely patient and kind while helping get her and her children signed up for multiple programs, including Allegro and baseball.

“Everybody is so nice…It was nice, because not only the music classes, but there are so many various classes the Park District has. And in Japan, there’s not organizations like you. I missed those programs. Not only me, but my son and the daughter, too.”

Nagaya felt so welcomed when she joined Allegro because Kevin Kelly, Allegro’s Artistic Director, and the other members were supportive of her trying to learn English. “I felt so much humanity and kindness,” said Nagaya. “So many members are nice. First of all, I couldn’t understand anyone, what they’re talking about during rehearsals, but they are so patient with me, to sing with me, and be with me…and I totally miss them.” Nagaya said she immediately felt like she fit in with the Allegro as they picked songs about love and peace, as well as songs featured in Broadway productions that really resonated with her.

Kelly, explained, “The basics of Allegro are that it is, as the name suggests a community chorus, which means that anybody is welcome to join. There’s no audition required.” Kelly highlighted how the chorus is inclusive to all ages, over 18, and all skill levels. “There are people who are in the chorus right now who had never sung before they joined the chorus. There are people in the group who haven’t sung for 30 [or] 40 years…. And then we have people who have never stopped singing their whole lives.”

This inclusive, supportive environment allowed for Nagaya to flourish, and become a strong leader for the group as she demonstrated strong music reading skills.

“She joined the chorus and became very quickly enthusiastic about everything that we were doing. And she’s also a very strong singer. She has a strong voice. She’s a very strong music reader. So, she was a good leader for the rest of the altos. And so, aside from her enthusiastic personality, we miss her leadership,” said Kelly. Nagaya moved back to Japan in 2019. Kelly explained, “When she and her family moved back to Japan, she asked if there was any way she could continue when she left. And in fact, she came back here on her own for the first concert after she was gone.”

“I can’t imagine somebody being quite so devoted to the chorus,” Kelly continued. “I would assume that at some level, she’s felt a part of, for lack of a better term, the Allegro family, and that the rest of the singers have helped her to feel that way. So, I think it’s very encouraging really, for anybody who might like to join Allegro that this is the experience that one can have.”

Allegro normally meets every Wednesday evening for 90 minutes at Cutting Hall Performing Arts Center. Due to COVID, Allegro has had to shorten their rehearsal time to an hour. “With singers, you want to restrict the amount of time that the air is circulating, because singing is more powerful essentially than talking,” said Kelly. “Even with a mask on you can only get so many people in our in our rehearsal space.”

This led to Allegro running hybrid rehearsals with half the group joining in person and half tuning in via Zoom, opening the opportunity for Nagaya to keep singing with Allegro. “And so, in a sense she was on the same footing as half the rest of the chorus. She could join just like they did,” said Kelly. 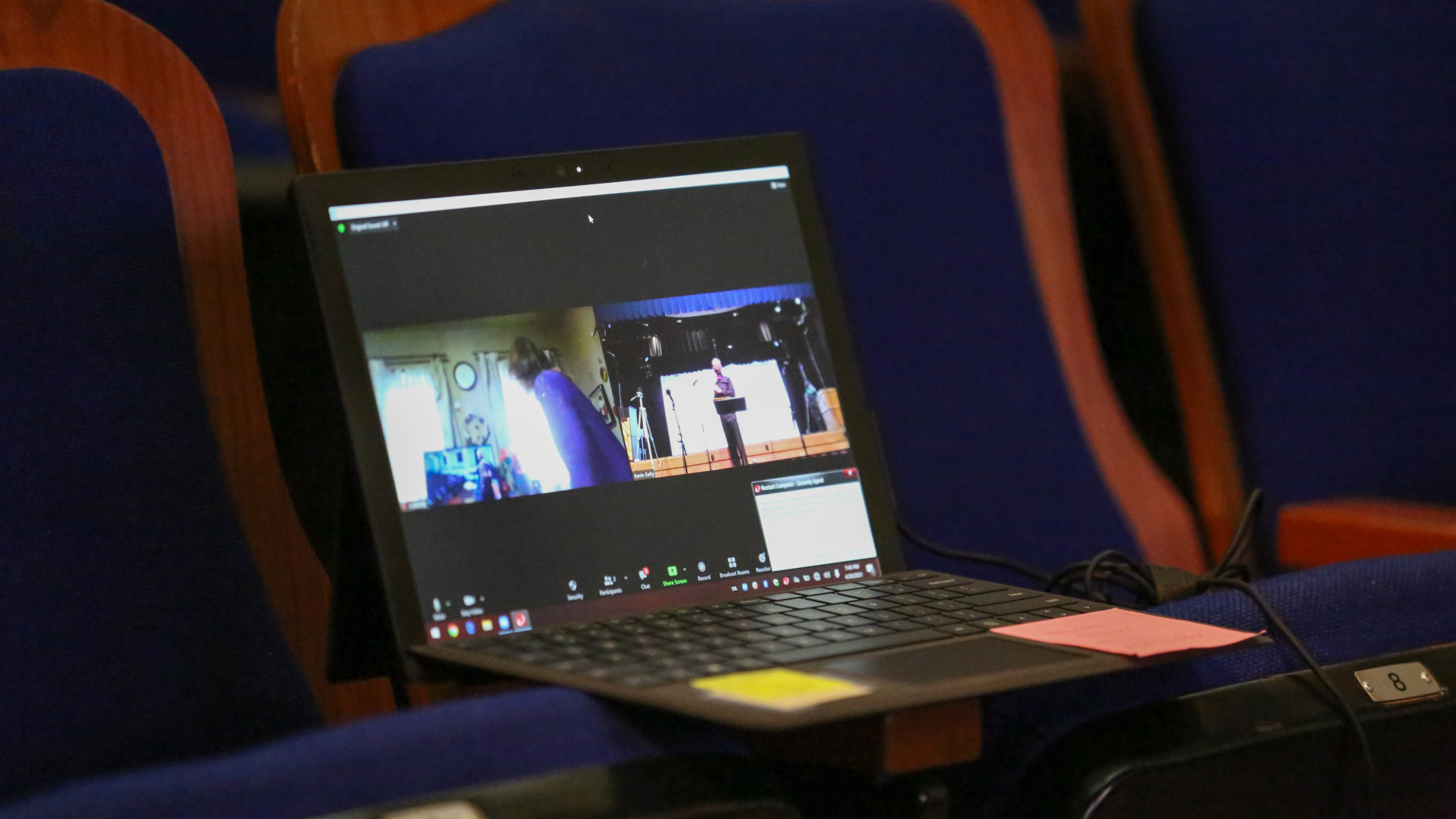 “Even though it’s kind of like a sad situation under COVID I was lucky to be there…it’s nice opportunity for us,” said Nagaya.

Allegro’s most recent concert, inspired by the last year in COVID, featured not only “Songs of Hope and Healing,” addressing the hardships and loneliness of this past year, but also Nagaya. Kelly said, “It was fun to see her you know, we had the computer set up, it was in front of me on one of the seats. So it’s kind of like she was sitting in a seat with the rest of the chorus members. And I could see her there with her folder. I think her dedication to the group is this really cool.”

Nagaya’s situation and willingness to participate from across the globe speaks volumes about the Allegro Community Chorus and the programs that Palatine Park District provides to all who wish to get involved. Kelly explained, “I’m certain that it says that the Allegro community is a welcoming community, that you can feel free to come in to the chorus being different, being either extraordinarily talented, or a brand newbie to singing and you’re going to be welcomed in and people are going to support you.”