How Do You Play Disc Golf?

Disc golf is played much like traditional golf. Instead of a ball and clubs, players use a flying disc or frisbee. The disc is thrown from a tee to a basket, which is the "hole". As a player progresses down the fairway, he or she must make each consecutive shot from the spot where the previous throw landed. Finally, the "putt" lands in the basket and the hole is completed. The object is to throw the disc from the tee area to the target "basket" in the fewest number of throws. 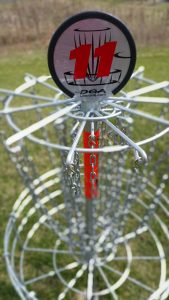